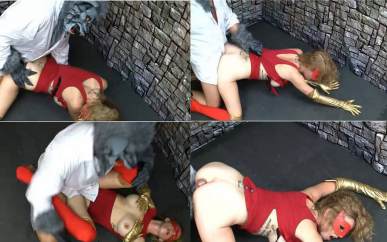 Red Nova has been searching the woods for missing hikers and she has found some kind of hidden chamber inside a cave. It is very dark and she hears some kind of feral growling coming from just beyond her sight.

Suddenly a terrifying beastman, half wolf half man comes charging at her. She barely has time to scream as his claws rip through her costume. Only her superpowers keep her from being ripped to shreds and she blasts the beast with her Nova Blast! The wolf man is barely even stunned and Red Nova tries to flee but she is nowhere near fast enough!

The beastman catches her and, grabbing her by her throat and crotch the powerful monster lifts her over his head while she screams and then slams her to the ground

The beastman shreds her costume more and rips the crotch away with his teeth. Red Nova screams in absolute terror as she feels the razor sharp teeth against her totally vulnerable pussy, but then instead of the agony she expected she feels waves of pleasure as the beast starts lapping away at her pussy

Finally the wolf-man covers her ass in a monster load and lets out a wild howl! Red Nova thinks it is over but the beastman quickly recovers and once more begins fucking her like a wild

“oh no! not again you animmal” she cries out

Will this be her final fate, to be fucked over and over by a wild beast-man?