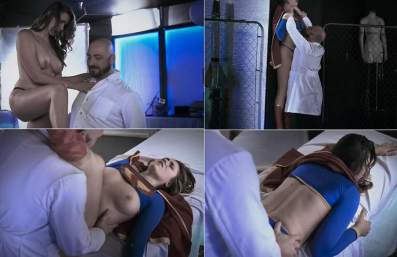 Synopsis: After a recent public battle with a particularly troublesome villain, faced with limited options, the agency begrudgingly sends Solaria on an extremely dangerous covert op. With specific instructions to exercise caution, blend in, and to capture Dr. Fernel at all costs, Solaria arrives at the reported lab location at undisclosed northwest US coordinates. Confirmed intelligence reports he is in possession of kryptonium, but his resumed experiments into a dangerous experimental steroidal compound are of greater concern to the senators. The recent public incident which caused massive destruction and forced an area wide memory wipe, was caused by a common thug with unusual strength and resistance to normal weapons. The compound’s origin has been traced to Fernel and Solaria knows she must capture Fernel before he has a chance to react. If Solaria was better at listening and heeding caution, she may have entered the lab undetected and possibly used the element of surprise in her favor. Unfortunately, her ego prevents her from doing so, and she immediately finds herself handicapped and KO’d. Regardless of the odds not being in her favor, she fights, resists, and even uses her feminine assets to attempt to distract and manipulate Fernel. She has to. She doesn’t have many options. As if it couldn’t get worse, Fernel realizes her efforts are an attempt at manipulation, and anger combined with an obscene amount of strength makes the odds of Solaria winning even less likely. Now the question is what will Fernel do to Solaria once he’s beaten her down.