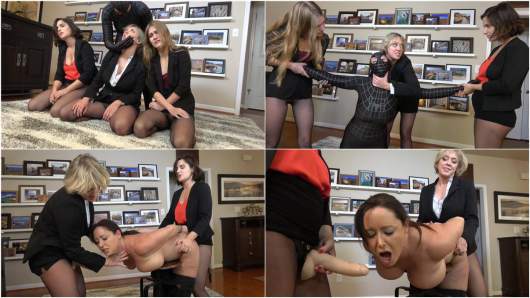 Hey guys – here is something HOT for you right in time for the holiday this week! I wasn’t sure if you guys would like a ZENTAI superheroine, but I took a chance and created this production for you, and I hope you enjoy it! If I get enough support for it, I’ll absolutely continue on with Christina as the title character in a new adventure. Christina Carter stars as SPIDER WOMYN, a sexy arachnid wall-crawler superheroine! She’s recently learned of 3 corporate bitches who have scammed and schemed their way to the top, and she aims to take them down!

Inside a random home, we see corporate con ladies Kylie Grace, Dee Williams and Tilly McReese enter. They laugh and joke about all the scams they’re running, including some very ruthless ones. Meanwhile, in the background, we see everyone’s favorite superheroine SW lurking, taking it all in. When she’s heard enough, she pounces, landing directly in the middle of them. SW quickly throws the girls down, hands on hips proclaiming she’s here to make them face justice. Without skipping a beat, SW begins to deliver a beatdown to all three girls, throwing them down, delivering punches and kicks, all the while tossing the girls around with her superior strength! She taunts them as she punches and kicks them away – these girls are no match for the mysterious and powerful SW! After she’s delivered a beatdown to them, SW lines them up on the floor, verbally taunting them, before grabbing and throwing them up against a wall so that she an FRISK THEM. One by one, she pats them down. But the girls have a surprise for her – just as she’s wrapping up with Dee and distracted, Kylie grabs SW and uses a hidden HYPO on her! The quick-acting agent weakens SW, sapping her power.
The 3 corporate bitches, now in control, begin a long beatdown session. As the 2 others HOLD SW with her arms spread, on her knees, she’s punched and kicked, and humiliatingly FACE SLAPPED multiple times. After they’ve beaten her to weakness, they pull her up and hold her in a bearhug for even more PUNCHING, knees to the crotch, and face slaps. Eventually it’s too much for SW to handle, and she goes down – the 3 bitches waste no time stomping and kicking SW repeatedly until she’s completely out. With SW out and helpless, they spread her arms on her knees, and begin teasing her and each other about who she is. They take bets, and then do the BIG REVEAL, revealing SW to be none other than world famous fetish model Christina Carter! By day a fetish model superstar, by night, a wall-crawling superheroine!
With SW completely defeated, they decide to have some fun with her. Dee and Tilly don STRAP-ONs, and handcuff SW’s hands behind her back, bending her over a stool. They then take turns FUCKING HER while the other one MAKES HER SUCK COCK. They switch positions so each girl gets a chance! SW is completely humiliated and sexually abused. In the end, she’s put out with something, as Dee CARRIES HER OTS to her fate as a plaything. Or maybe sold off? Or blackmailed?
Lesbian, Lesbian Domination, Groping, Catfight, Drugged, Humiliation, Strapon, Spitroast, Strapon Vaginal Penetration in Standing Doggy, Spanking.