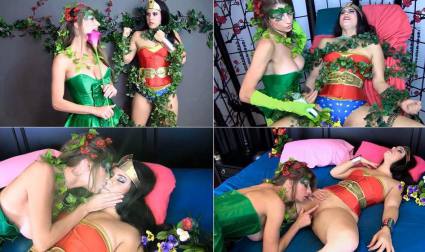 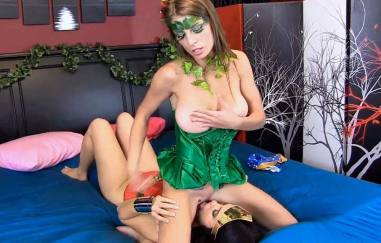 Wunder Woman is after Lex Luthar, She captures one of his lackies and makes him talk with her Lasso. She goes to where the thug told her but finds Poison Ivy Waiting for her. She is captured By Poison Ivy’s Vines and they start sapping her strength while Poison Ivy mocks her and slowly kisses her over and over until she goes out

WW is out when PI crawls into bed and takes off her boots, then wakes WW up and the Amazon cannot resist PI’s kisses and is too confused to stop the villanesse. PI has fulfilled her fantasy and now uses a fatal kiss to end WW.

WW suddenly takes in a deep gasp. SHE”S ALIVE. She was too strong for PI’s kiss to finish her. As her strength returns WW becomes Determined to get PI and as she puts her boots back on a hitman comes in and tries to make her surrender

WW has had enough she gets a hold of the Hitman but Lex Luthar gets a rag on her from behind while the Hitman (Mr Grey) helps restrain her. She goes out after a hard struggle. LL has Mr Grey put her on his shoulder and carry her away

WW wakes and is held by chains. LL mocks her and she faces and intense session of Forced orgasms and throat squeezing. She resists fiercly but LL is an expert and makes her scream in ecstasy and shame, WW gets her composure back each time But L breaks her again and again. Finally LL is satisfied with their first session and puts her out with a rag to leave her until he wants to amuse himself