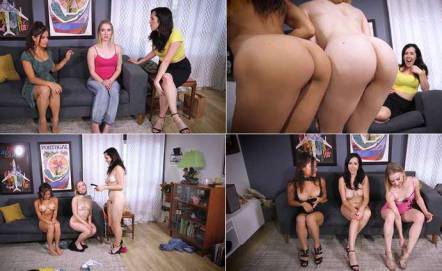 Dixie is enjoying the attention but decides it’s time to have a different kind of fun. She passes her phone and tells her to call and break up with her boyfriend. She laughs as Riley happily dumps him with a smile on her face. Next she pulls out two slave collars and puts them on Riley and Chi Chi. She attaches leashes to their collars and has them crawl around the room on their hands and knees. Dixie so enjoys walking her new pets around and laughs at how embarrassing this would be for them if they went out in public like this. Rylie and Chi Chi have no morals anymore, they only care about sex and whatever Dixie wants them to do. They tell Dixie that they will do anything for her, they will even strip for cash. Rylie suggest they go down to that new club that opened up and ChiChi happily agrees with her. Dixie tells them that sounds like a wonderful idea and gives Rylie a big kiss for coming up with it. Dixie then dresses her new sluts up in sexy lingerie and has them practice posing and acting slutty to attract male customers. Finally she sends them off together to go suck cock and bring her back all their money as she lounges on the couch laughing deviously to herself.