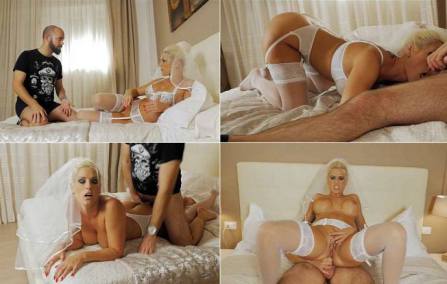 This is the first bridal night for Blanche and her hubby. Blanche sends him to take wine on Hotel restaurant, cause the room service is too slow. When he knocks at the door, Blanche tells him to enter but… there isn’t her husband who’s bringing the wine. There is actually a man dressed in strange clothes. He seems an hotel customer that was lost in the hotel room. Blanche asks him why he’s dressed in such a strange way, but it answers it is the normal outfit for the concierge. That is a bullshit of course. The man claims Blanche’s hubby was at spa, with other girls… that’s why he’s late…

The man starts touching Blanche’s leg, telling her if he wants some company for the night. She denies the proposal and fucks off the man. Now that’s the moment he does something strange, passing an hand in front of Blanche’s eyes. She is frozen in a while.