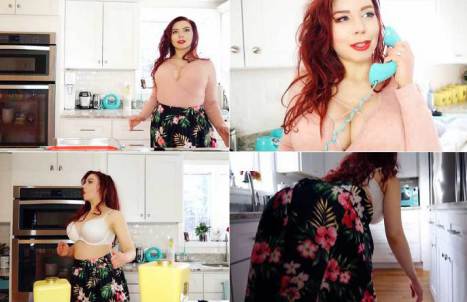 POV is sitting at the kitchen island after school. His Stepford Wives style babysitter walks in, “Hello. How was school today?” She smiles widely at POV, “You are such a bright boy with so much potential. Let me fix you your dinner.” She begins to walk away when she suddenly freezes in place, then twitches and returns to where she had been, repeating the same programmed greeting. She walks away to retrieve the ingredients for dinner, but a corruption in her programming has set off a string of glitches. She comes back with a container of flour and pours it into a casserole dish. Her movements are no longer smooth. Now she moves with a robotic stiffness, stirring the flour and staring at POV with unblinking eyes and a wide grin.

She then pours an entire container of teabags into the flour and pushes it toward POV. “Bon Appetit.” POV asks her to call his dad, concerned about that’s happening at the moment. “Command received. You would like me to call…dad. I can do this for you.” She walks to the phone, but when she picks it up, instead of dialing any numbers, she begins to say “Dad,” over and over again into the receiver while undergoing facial twitches and vocal inflections. She slams the receiver into the base with forced multiple times, then turns back to POV, smiling. “Dad has been called.” She falls back into the same programmed dialogue, glitching and moving stiffly until she shuts down. She reboots herself, but her programmed personality file can’t be found and she enters voice command mode. POV decides he might as well take advantage of the situation and see what he can get her to do, so he tells her to activate “Stripper Mode.” After she downloads that personality profile, she begins to act and talk like a bimbo asking POV what he wants and calling him “Big Boy.” When her wants her to take her top off and show him her big tits, she eagerly complies. And when he asks to see her big butt, she turns around to lift her skirt and show him, but suddenly malfunctions and begins behaving in a glitchy robotic manner, repeating phrases and movements until she needs another reboot.

She seems to find some of her initial programming, but because everything is corrupt, she is not able to retain that personality and keeps glitching. Her words and movements are stiff and robotic and she twitches this way and that. Her whole facial structure begins to lose control and she makes silly faces in the process of this major meltdown until she reaches a complete system failure and falls forward limply. Her eyes are wide (and one seems to not be correctly calibrated to stare in the same direction) and she’s completely motionless. POV gets off the stool and walks around to her. He lifts her skirt so that he can finally see her big butt he only got a tease of earlier and squeezes and pats it. Then he gives her butt a little push and her whole body falls heavily to the floor with a thud and a clank, her butt sticking out from her skirt. POV walks back over to his dinner, looking at the mess of tea and flour and then decides to go to his room. Smoke begins to seep out from the babysitter bot when her internal hardware explodes and fills the room with sparks, smoke, and debri. Looks like this model might be out of commission.