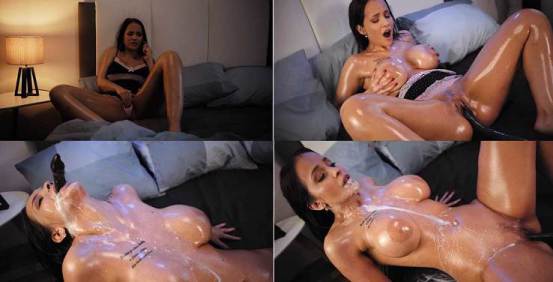 Jennifer Mendez is alone at home, on the phone with her boyfriend who’s on a business trip, and as one thing leads to another, they start talking dirty. She’s not the one to give in to such perversions, but the lack of dicking is making her go to bed, listen to his voice spewing filth, and touch herself over panties. But she knows better, and suddenly tells him to stop it, she’d rather wait until he’s back so they can shag properly. Well, she should have known better because it’s never a good idea to go to sleep without relieving yourself. As she falls into deeper sleep, Jennifer starts to dream of dirty things, a real life hentai dream to be accurate. She dreams of long black fucksticks that are looking strange but are fucking her so nicely that she’s squirming in real life. All of that must have been noticed by Mr. Alien, he senses that there’s a girl who’s practically inviting him to fuck, so he shows up while she’s still sleeping, dreaming of no one else but him. The tentacles crawl up in her bed, they gently wrap around her arms before she notices anything, and right when she starts to wake up, her hands are pulled to the sides and pinned down. She’s in disbelief, unable to know what’s real and what isn’t at this point, and while she’s confused there’s another tentacle crawling over her tender thighs and approaching her panties. Jennifer’s in shock, but she knows exactly what to expect as the tentacle takes her panties off. She lifts her legs up, expecting the tentacle to enter inside her, her thighs are sweaty, her pussy is moist, and she takes deep breaths as it plunges deep inside her. It hardly takes a few strokes inside, and her mind is getting clearer, she sees right away that this is exactly what she needed. After so many days away from any kind of dicking, she goes through a kind of relief, the delight that’s brought upon her is unlike anything her boyfriend is able to provide. So she lets in, seems like all those wet dreams were simply a clairvoyant moment of what’s to come, her mind telling her that she’s going to enjoy it. She truly believes her instincts, and they are telling her to play with her massive tits. The tentacles release their hold on her hands, they let her squeeze that pair of juicy balloons. As the night goes on, her insatiable pussy grows hungrier, it needs to be fed with some more tentacles, and not only that but drilled hard. At one moment they stop, and she starts begging, turning around on her bed, and placing herself in a doggy position, moaning “fuck me”. This time it’s time to sate her cravings properly, and it can only be done with a couple of tentacles, one doesn’t do her sweet, peachy pussy enough justice. But neither do two apparently, she can take another one easily, for intense triple penetration. Her massive, oily booty bounces while she’s taking rough triple penetration, her moans get louder, and it’s evident that she’s enjoying every second of it. For a girl this open-minded, her new friends got something even better. Instead of three, she is now faced with one, single, thickest tentacle. It goes through her pussy and peeks out of her mouth after filling her throat with a load of cum. Finally, she takes a massive bukkake for the end, and then… wakes up. Her sheets are drenched in sweat, or is it something else? Was it just a hentai dream? She’ll find out after taking a peek under her cover.