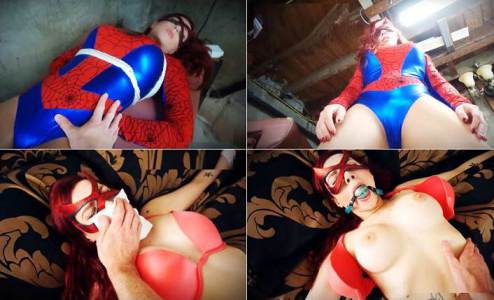 In the last Spider Hahn episode, Spider Hahn Vs The Devious Doctor: A tired Superheroine Parody Spider Hahn was captured by a Doctor with a devious agenda while volunteering for charity. She wound up being his guinea pig for a new pleasure formula he’s been developing, capable of causing o’s. This is the next chapter in the story…

The scene opens back in the secret basement lab of the Devious Doctor. Spider Hahn is with her wrists tied behind her back and ropes around her chest. The doctor ties her ankles and knees together slowly and methodically, savoring every moment of it. He caresses her, bound body, and with some of the formula remaining in her system, she begins moaning softly with pleasure. But her moans begin growing louder and the doctor needs to shut her up so as to not call attention to his basement lab. He puts his hand over her mouth and plays with her BIG TITS, which sets her into a more awakened panic and she struggles with her binds, until he rags her out. Her eyes roll and she falls . He ties a cleave gag in her mouth to keep her quiet while he returns to work, caressing her body some more before he’s called away.

After some time, Spider Hahn slowly regains some consciousness and struggles to get free from her binds. She squirms on the table while she works to untie her wrists, then she sits up and pulls the gag from her mouth, vowing to get revenge on that doctor.

The Doctor returns to an empty table with some loose coils of rope. “Looking for me?” She says, sneaking up behind him and throwing a punch to his face, which knocks him into the table and onto the floor with a thump. She strands over him, straddling his body with her arms on her hips in a power pose. She scolds him for his bad deeds and tells him her plan of action, but she’s so busy with her monologue that she doesn’t notice he’s pulled a hypo from his pocket that he jabs into her foot. In an instant, she’s staggering back and forth before falling face down on the table with her big pantyhose booty out on display.

The doctor plays with her arms to make sure she’s out before tying her ankles and wrists together. He gropes her pantyhose legs and big butt. Then, just to be safe, he jabs her in the butt with a fresh hypo, to keep her out for transport. He lays her down on some bed sheets and wraps her for covert transport to his house.

The camera pans over her body, stripped down to her bra, panties, and hose. Her mask is still on, but the rest of her uniform is missing. She’s tied spread eagle to the doctor’s bed, which she isn’t too happy about when she starts to come to. “Where is my uniform? Give it back now!” She grows more and more irritated with him, struggling against the ropes. He takes out a rag and applies his O Formula. “No, not that stuff again! No!” She struggles HARD, but the rag is over her nose and mouth and she can’t help but to inhale. Her eyes roll around before a dreamy look appears on her face. This is a stronger dose than the last. She becomes incredibly horny, telling the doctor she wants him while gyrating on his bed in her shiny pantyhose. Her moans grow louder when he caresses her, and louder still when he unsnaps her bra and plays with her big tits. “Please, doctor, please! I want you! I need you!” The doctor gets on top of her and she climaxes from the formula. He rags her out immediately. It’s a success. He transformed a strong superheroine into an ultra horny sexpot. Imagine who else he could take down… He pans over her, helpless body…She’s his now..

Will Spider Hahn recover her senses and be able to escape? Or will the Devious Doctor continue his sexual experiments on his spider slave?