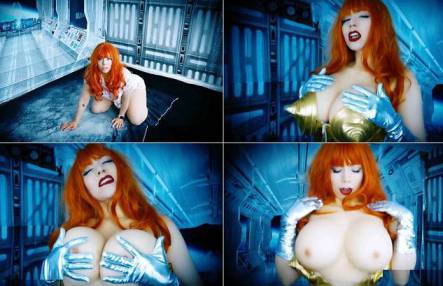 Clip Includes: Alien Body Snatcher, Body Swap, Body Transfer, Alien Disguises Self in Voluptuous Female Body Taken From Earth In Order to Seduce Men and Extract Their Sperm to Repopulate Alien Species, Species Swap, Transformation, Possession, Body Exploration, Practicing Seduction Skills, Big Tits, TONS of Bouncy Squeezy Jiggly Tit Play, Redhead, Curvy, Thick, Big Juicy Tits, Cone Bra Bustier, Stockings, Garters, Unzips Shiny Bodysuit to Play with Bare Tits, Boob Bouncing, Getting Super Turned On Playing with New Female Body, Moaning, Writhing, Attempts Dirty Talk, Acts Like Bimbo To Try To Better Impersonate the Female Whose Body She Stole, Returns to Earth To Seduce And Fuck As Many Men As Possible, Impregnation Fantasy, Ludella Hahn, Contains “Topless” NUDITY
In the middle of the night, an alien spacecraft enters the Earth’s atmosphere and flies down to a skyscraper apartment complex in the city. The creature on board has selected this building because it contains a female it’s been studying, a human female whose body it wants. Under the dark veil of night, it extracts her from her bed and beams her aboard its craft.
Once aboard, the girl begins to stir and open her eyes. Startled by her surroundings, she has a moment of panic. This can’t possibly be real. It must be a dream, right? But then a door slides open and a POV alien creature enters. Her eyes go wide and she scurries back toward the wall. No. No…this can’t be…GASP. It looms over her, and then it attacks. She screams, but there’s no one to listen. The process happens quickly, and before she can do anything to stop it, her body is no longer hers. The girl is no more. Her body has become a costume that the creature slides into to disguise itself as a human female.
“Yes, this will do the trick.” She grins, gliding her hands over her new voluptuous body which she has dressed in a shiny gold cone bra bodysuit and stockings. “After months of studying this female specimen, I know I’ve selected the right one to use for my mission to repopulate my species through the extraction of male sperm. Of course I have other objectives. The men who are not suitable I will just suck out and consume for strength. Or maybe I WILL extract their sperm and then drain them anyway, like a praying mantis…use the men for my needs and discard the rest.”
She continues to explore her new voluptuous form. “I have all the right features for a fertile appearance. Luscious chest lumps…what do they call them? Oh yes. Breasts, boobs, tits… Yes… These are like magic tools. It seems like the juicier and bouncier they are, the more they attract the male species.” She bounces and squeezes her new big tits. “I think I should explore these assets and practice how to use them…” She jiggles her big booty and admires her curvy legs. “I will use this body for my own means… No man will resist this body–these curves…and they will not know that I am ALIEN inside…” She grins mischievously.
“They all seem so fixated on these boobs, so let me practice how I will use them to seduce my male prey…Mmmm…I see they are very squeezable…” She plays with her big juicy tits, bouncing and squeezing them, seeming to find them quite fun and appealing herself. Then she begins to practice her seduction methods and dirty talk. “I will approach him with my titties out and say, ‘Hello, sir…I’m feeling…what’s the word…horny. Would you like to…fuck me?’ Yes, that should compel them to insert themselves into me. But if it doesn’t work, I will just have to…unzip a little…and then they will become hard…and that is how I know they are aroused and ready to fertilize me.” She grins, satisfied.
After unzipping her bodysuit, she continues to play with her bare juicy tits, bouncing and groping and squeezing them. “I will use these big, bouncy boobies to seduce them. It seems to be the trick I have learned from this species. The bigger and juicier my boobies are, the more fertile I appear, and the more they will want to insert themselves into me and fuck me. And I shall get what I want from them and they will never know the wiser that I am not a real female but an alien inside. They’ll really be fucking another creature. Haha. The ultimate trickery…” She laughs. “Can you imagine when they find out…when I am filled with their spawn…and then I…Mmmm…suck out their lifeforce…” Drool drips from her tongue.
“Perhaps I will take one back here with me so that I can have them fill me again and again and again… I will have to test quite a few to decide who will produce the best offspring for my kind…” She decides to practice acting like a bimbo as the female who owned this body before behaved, but it takes her a bit to get it right. She practices more of her seduction skills and dirty talk while playing with her huge bare titties.
After a while, she feels satisfied enough with her performance to prepare for her arrival on Earth. She zips her v=boobs back into her cone bra bustier (with a bit of a struggle to contain them inside) and then she puts on her boots. While sitting on the floor, she admires her stocking legs and then spreads them to practice the moaning and thrusting motion of intercourse, but she has to stop because she discovers that just the simulation has caused her new female body to become aroused. “I guess I’m feeling quite human after all…in this body…with these human sensations… I’m feeling a hunger…a lust…a NEED to be filled… I must be fertilized immediately. Men of Earth, I hope you’re ready… Here I COME!”