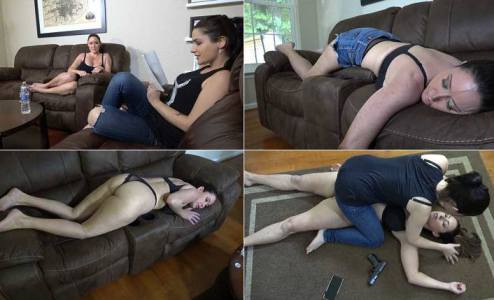 Here is a brand new fan-commissioned custom project (broken up at a natural segue due to the 30-min length) that features Tilly McReese and Christina Carter as themselves. We open with Tilly on the couch reading scripts, preparing for the big shoot day she’s having with her friend Christina, when she gets a call from her model friend Cali. They talk briefly, until Cali mentions a trigger word, which puts Tilly UNDER HER CONTROL. Tilly is instructed to implement the “plan,” which we come to find out involves putting Christina out over and over again!

Later, Christina and Tilly are on the couches discussing the day to come. Tilly discusses the various things they’ll be shooting, until she reveals that the she’ll be making Christina into a sex slave. Christina is at first thinking it’s a joke, but Tilly reveals that she’s put something in Christina’s water (that she’s been drinking off and on) to ensure this’ll happen. Christina is shocked and refuses to believe it, but as she stands, begins to feel drowsy. Tilly whispers into her ear what she’s planning, as Christina stumbles, and falls to the floor, COMPLETELY OUT. Tilly stands over her, REMOVING HER TOP, leaving her in a bra, shorts, and panties. Later still, with Tilly gone, Christina wakes, trying to compose herself. She hears a weird sound, which is the gas entering the room. She can’t escape, as it’s too late, and the gas puts her back out onto the couch, COMPLETELY OUT.

Tilly enters again, and strips off Christina’s shorts, leaving her in bra/panties. When Christina wakes later, she tries to escape. In a different room, she finds her purse and uses a phone to try to call the cops. As she’s about to finally explain what’s happening, we see Tilly from behind use a TRANQ weapon on Christina! Christina stumbles around, drops the phone, crawling about, until she falls completely out. Tilly REMOVES her bra, leaving her in panties, as she does some POV (hers) looking over Christina’s body.

Look for Part 2 which features Christina becoming Tilly’s sex slave in the bedroom!