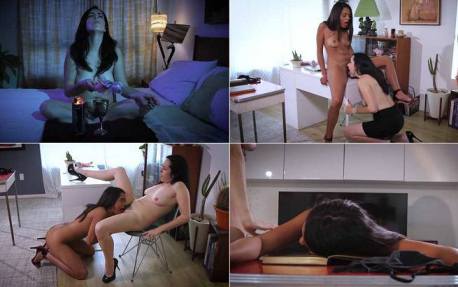 Vienna is a goth schoolgirl who is punished with a week of detention by her religious English teacher for writing a paper about witchcraft. Dixie is the teacher in charge of detention who at first is sympathetic toward Vienna but has a change of heart when Vienna tells her that her punishment is stupid because “it’s all just made up nonsense anyway.” Turns out Dixie is an actual witch and she does not like Vienna’s skepticism.

Later, when Vienna has left detention to use the bathroom, Dixie goes fishing in her bag to find something to use for a spell. She hits the jackpot when she pulls out a hairbrush. She grabs a handful of Vienna’s hair and shoves it in her bra for safe keeping quickly before Vienna comes back. That night, alone in her room, Dixie sets up a ritualistic space to work her magic. She uses Vienna’s hair along with other mysterious ingredients to put a spell on Vienna by creating a doll that she can use to control her.