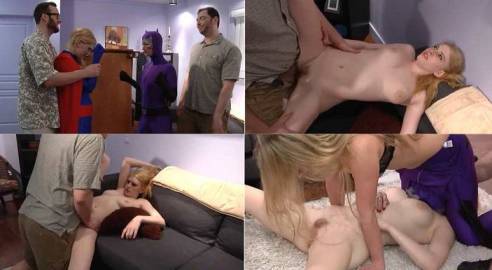 Supergirl is sitting at her house, admiring her costume when Catwoman comes in and throws a kryptonite flash bang pellet that weakens Supergirl and tells her that she will reprogram her brain to do evil, but she is still a heroine, so she fights the evil. Two timestopping perverts, Rock and Brock, are hiding in her closet, they see the fight break out and decide to stop time, they step into the room and test them out, swinging their frozen arms at each other like superheroine action figures, after some fun posing them, they sneak back into the closet and restart time. The girls keep on fighting, not realizing what happened. They keep fighting till Catwoman ends up on top, and she orders her to worship her boots, Supergirl refuses, so Catwoman grabs her and makes her kiss her boots. Rock and Brock see this and stop time, they come out and switch the girls so Catwoman is kissing Supergirls boots. They restart time again and Supergirl rushes at Catwoman again, they roll around wrestling.The guys stop time again and come out and undress them slowly, they fondle Catwoman and each fuck Supergirls tight Super pussy and cum inside of her and on her stomach. After they are finished they set them up in a 69 position and restart time. The girls start to suspect something and hear them moving in the closet, the girls sneak up and pull them out of the closet and Supergirl punches Rock in the face just as Brock stops time. They set them up in a sexy pose and leave them frozen, planning on restarting once they are far awa