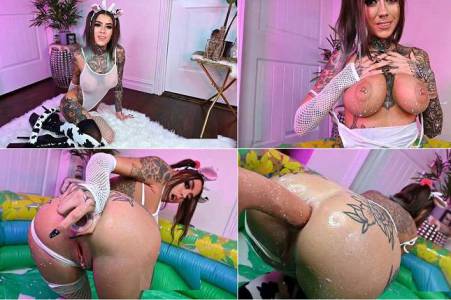 You’ve been summoned to join your fellow freshman pledges, in a lineup durning recruitment week. The fraternity brothers have hired a sexy stripper, to test all of you. Whoever lasts the longest, will have the honor of becoming the newest frat brother. She arrives in naughty cow attire…Suiting since her milkers are so big. It almost makes you wanna call her mommy. In fact, while she’s explaining the rules she, demands you only refer to her as ‘mommy’ throughout the night. She also, explains she’s there to test out every pledges cock to see who can last the longest. First, everyone takes turns whipping her ass till its red & swollen. She notices, some of the pledges are getting worked up quite quickly but, she’s just getting started. She Pours milk over her tits & ass before, showing you her favorite trick. She fills her ass with a milky enema while, stuffing a huge glass plug inside herself. Everyone gasps in excitement but, the best is yet to come. She removes her plug & squirts everyone with the milk that was just in her ass! She plays with herself some more & gapes her ass with her toy while, winking it. Some of the pledges, can’t help but squirt their load into her gaping asshole. There’s only two pledges left so, she decides it’s time to let them fuck her milky cum filled holes. She backs her ass up onto one cock & fucks it, alternating from her ass & pussy. Next, she hops on top of the other pledge & rides his cock. He gets even harder watching her fat pussy grip his cock. She then, slips it into her ass & pees all over him while, he’s still got his cock in her ass. Finally, She wants both cocks at the same time. The two remaining pledges eiffel tower her before, making her ass gape even more. To her surprise, both of the last remainIg pledges fill her ass & mouth with huge loads at the same time