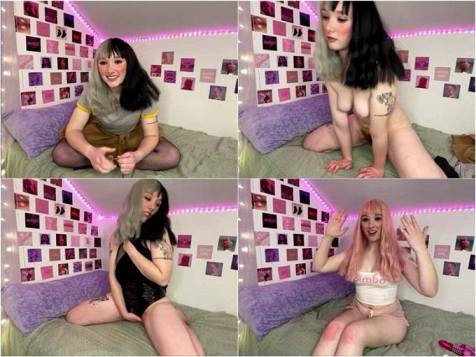 Lillith is an adorable person, she’s whipsmart, beautiful, clearly kinky, a big old brat, massively submissive and absolutely amazing to work with. Lots of *very* visible resistance play in this one. At times she does manage to postpone her reaction to the triggers and programming I give her, but she never manages to fully defy it, either because the sensation of eventual surrender is just too appealing, or because I manage to circumvent her defences (in one case, I can see she’s clearly feeling too bashful to spill her kinks… so I strip away her self awareness and out they come tumbling.)

Lots of fun expressions here as she tries to work out what’s happening to her.

There are “Maybe I can resist?” moments where she can feel a compulsion but she hasn’t *quite* given into it yet.

There are “Shake it off!!” moments where she tries to fight the influence.

There are “What’s happening to me?” moments where she’s in the middle of a scene (sometimes a dominant one) and her mind just starts draining out of her whilst she tries her hardest to hold the vanishing threads of it together.

As she’s transformed into a puppy, she can hear herself losing the ability to speak and you can see her visibly fighting to talk normally whilst devolving into little nonsensical noises.

At around the 1hr 25 mark, I actually have to *lighten* the trance and bring her almost fully out for a lil while as she becomes so discombobulated that she can’t think straight even when she’s supposed to. This manifests itself in a pretty adorable way though, with lots of smiles, baffled looking head shakes, and puppy-like motions and noises.

I do love a brat, but the control freak in me loves the ability to turn brattiness on and off with a good subject. Doing it with Lillith is a treat. She goes from being very flirty, evasive and begrudgingly submissive to very matter-of-factly obedient. Watching the transformation is pretty damn hot.

This shoot also features a couple of fun personality / alter-ego triggers. BRAIN DRAIN causes a slow loss of self, identity, emotion and memory over the next minute or so, leaving the subject asking “Who am I?” and believing and becoming whatever they’re told, and TABULA RASA has the same effect, but is instantaneous.