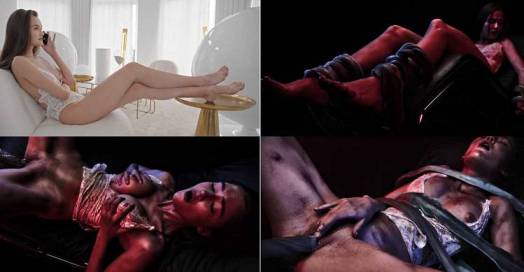 Sonya Blaze has gone a long way from her first Hentaied introduction in the Eggflation video. Now she is just a regular girl, she likes to do girl stuff, loves going out, having fun, but sometimes she just doesn’t have luck. All her friends are blowing her off, no one wants to do anything, and it makes her bored out of her mind.

That boredom, however, is going to be short-lived because she has a visitor inside the house. The very sight of tentacles crawling around her floor is not something she was delighted to see, but it certainly got her speechless and unable to move. Next moment she knows, it’s a full alien abduction, they’re around her neck, placing her into sleep before she’s transferred.

She awakes in a strange place where the flashing lights send her straight back to sleep. Then again, she’s awakened, and now the sounds confuse her and send her to sleep once again. Maybe third time’s the charm? She’s got tentacles around her arms and legs, she’s in a chair, and notices a couple of them approaching her love cave.

And then bam, she’s back to sleep again. All of this has confused her, so the next moment she wakes up, Sonya starts doing something strange. She’s touching herself, something she usually wouldn’t do especially in this kind of situation. She just can’t stop playing with herself, her fingers are touching the clit, massaging it, and she’s playing with her perky tits.

It’s like she’s been brainwashed into becoming a sex slave, but who cares? She’s having fun, and that’s the only thing that matters right now. Then she hears that familiar sound of tentacles approaching her, but this time she can’t be brought to bother with such things, instead, she accepts it.