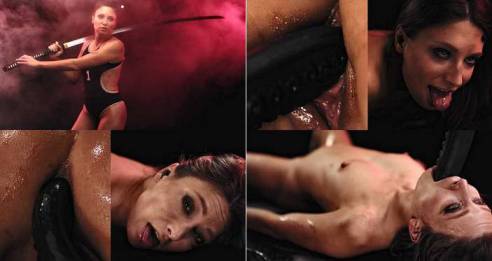 It won’t be long before she’s eye to eye with some tentacles, they’re crawling towards her, climbing up her legs, and wrapping themselves around her sword. It’s so strange, she’s not even making a move, as if there’s something wrong with her, as the tentacles are enchanting her mind.

One of them manages to wrap itself around her neck, gently choking Talia until she’s fast asleep on the ground. Well, only one thing to do now, the tentacles slowly undress her, revealing those perky nipples, and her dazzling pussy. Next thing you know, she wakes up, but in a different state of mind.

The sound of her roaring moans grows louder, Talia’s eyes are rolling up, her eyelids are half-shut, and she’s drooling all over. The saliva drips from her chin while she’s swaying from hardcore pounding happening in the back. These tentacles know well what they’re doing, and they’re ready to bring it up a notch.